The Access Points that we install use the 2.4Ghz frequency range. This is divided into 13 channels of which all 13 are licensed for use in the UK. Many European countries and the USA only license channels 1-11. A lot of laptops purchased in places like Kosovo or manufactured by American companies are distributed with settings that limit them to channels 1-11. Some games consoles only use channels 1-11.

The 2 standards that our access points support are 802.11b and 802.11g. When an AP transmits it actually sends out a signal over a range of frequencies. The channel is the one at the middle of the bell curve. The transmission profiles of the 2 standards are shown below. If an AP is transmitting on channel 13 and a laptop only uses 1-11 then it may still get a signal but only very a weak one since it is only receiving the tail end of the bell curve. 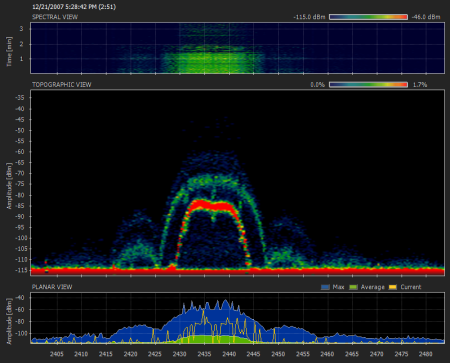 In the image above the transmission is centered on channel 6 although it actually transmits to some extent on channels 4,5,6,7,8 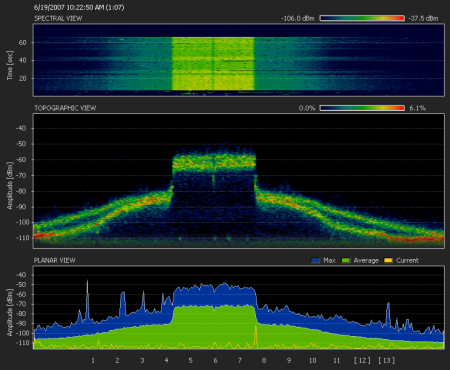 This transmission is also centered on channel 6 but again covers a range of adjacent frequencies.

Because of the profiles of transmissions there are 3 channels that tend to be chosen to minimise the overlap in frequencies. Channels 1, 6, and 13. Because many of our users have games consoles, or PCs/laptops that are not configured to use all 13 channels we do not set APs to use channels 12 and 13, but instead use channel 11.

The access points we use have the ability to autoselect the channel that they use, or they can be locked onto a fixed channel. If APs are in autoselect mode and they encounter interference from nearby devices then they change channel to try and find a quieter channel. However this has 2 major drawbacks. First it means that they will often select channel 13 as the one with the least interference and this means users get a very poor or even unworkable signal. Secondly some makes of wireless adapter are not very good at following the changes in the channels, so when the AP shifts channel the Laptop gets left behind on the old one and again gets little or no service. We know that some models of Dell laptops have exhibited this problem.

We therefore use fixed channels with each AP given a channel that is different to its immediately adjacent neighbours. However during the initial 2-3 weeks we run the network in Autoselect mode. This lets our APs scan for non SoldierNET APs and other "Rogue" devices. Since we need to try and deconflict with as many 2.4Ghz devices as possible especially the non SoldierNET ones we need to give the network time to find and scan for these devices. During this initial stage you may suffer some performance problems as channels change and channel 13 is sometimes selected. After the initial period channels are fixed. We will periodically check for rogue devices when our APs start to show signs of increased interference.